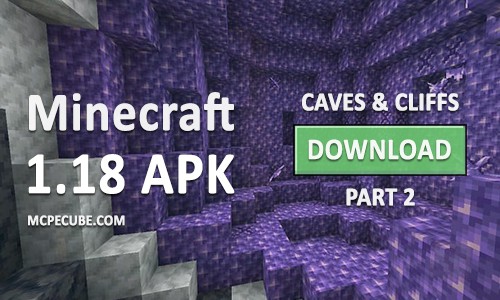 As you might have already heard or seen that Mojang divided the big Cave update into two different parts, in one of the previous articles we have already mentioned, we previously published the first part of the Minecraft Bedrock 1.17 update on our website, now it's time to get acquainted with the full version of the second chapter of the update, namely Minecraft PE 1.18 for Android users, as well as devices that use the Android operating system.

Of course, these parts of the updates are still in the process of being finalized and Mojang makes new changes to them every week, but let's consider below everything that is already available to players in everyone's favorite Minecraft world. Among the innovations that are already available to each player are the unique mobs such as Wardens, a new generation of fascinating mountains with amazing caves, and different biomes.

What do you need to know about the update Minecraft PE 1.18?

What do you need to know about generating worlds?

The first thing players need to know is how the cave generation has been changed. In general, Mojang changed the generation of not only caves but also mountains, and also added ore veins.

What do you need to know about caves? 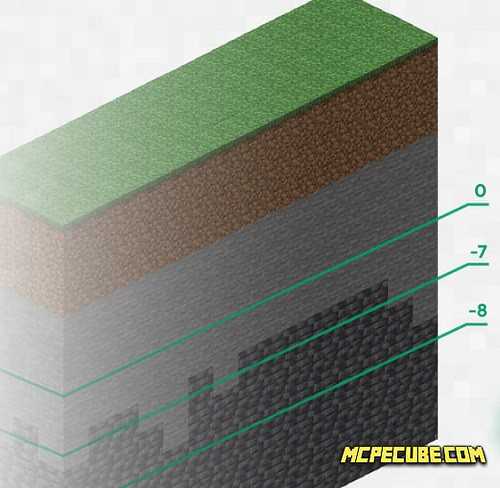 In the layers of the deep slates cannot be generated such blocks as diorit, ground, granit, and andesit!

Separate unique locations, aquifers, and underground water are now generating inside the caves. Please note that aquifers below zero level can be generated even with lava, so be careful. The old caves will be improved and combined with the new ones. Narrow rifts and deep canyons have also been added.

Two types of caves were added to the world of Minecraft which are called Spaghettis and Cheeses.

The first type of cave is made up of tall stone columns, new unique ores, and fascinating aquifers. These caves are large enough that players can even fly inside using elytra. 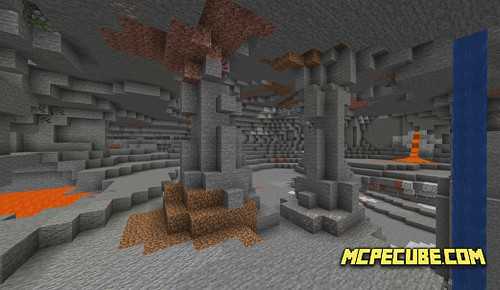 The second type of cave with aquifers.

The next feature of the update is not only caves but also mountains.

With the new release of the update, the generation of mountains has been updated. The different types of mountain areas were added to the world of Minecraft that high up to two hundred fifty-six blocks!

1. The first is mountain meadows. This type of mountain is found at the foot of the mountains. Here you may find different plants such as colorful flowers, different bushes of different shapes, and berries. 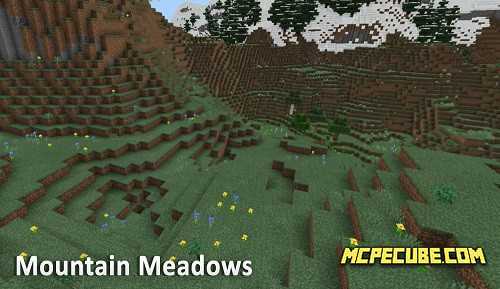 2. The second type of mountain is groves. The surface is consists of Snow. There you may find spruce trees and rabbits also grow here. 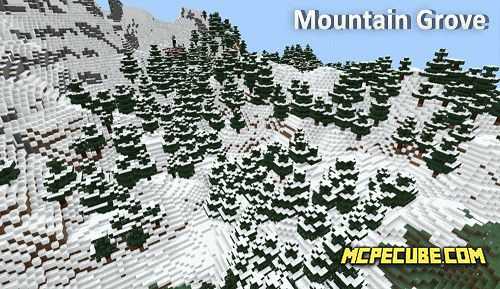 3. The next type of mountain is the slopes of snow, which are the penultimate level of the mountains. These mountains consists of different types of snowy blocks and ice. Mobs such as Goats also spawn here. 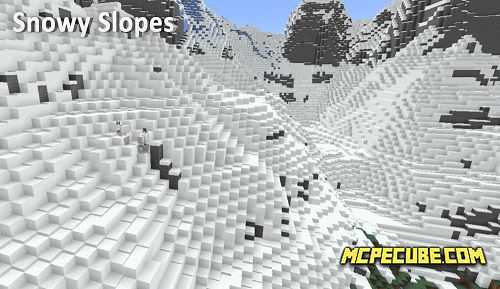 4. The fourth type of mountains is called the highest peaks. This location can be generated if nearly located with warm areas. This type of mountain is covered with snow and ice. 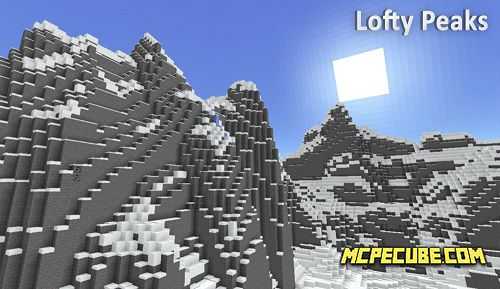 5. And the last type of mountain is snowy peaks. These types of mountain formations are generating with the surrounding cold areas that are consist of snow blocks and ice. The upper part of the mountains consists of such types of snow as simple and powdery, simple and dense ice. 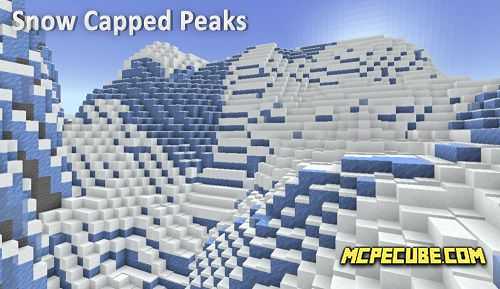 The first thing to pay attention to is the increased height of the world, which now ranges from two hundred fifty-six to three hundred twenty blocks! Ores such as iron, coal, and emeralds were also added to the new Minecraft areas. The textures of all ore blocks have been updated. Mountains can be of different heights.

What do you know about the Veins of ore?

Perhaps you already know what it is, but still, this is a rather rare accumulation of ores and other blocks in one place for those who do not know. The main features of such veins are copper ore and granit generated above Y level 0, and ores of iron and tuff will be generated below 0 levels!

We've all been waiting for this for so long! You ask yourself, what exactly? And we will answer you, these are new Biomes!

In the new update, Mojang added new underground places. Let's take a look at the detailed descriptions of the new locations below!

The first area of caves is called Lush Cave! 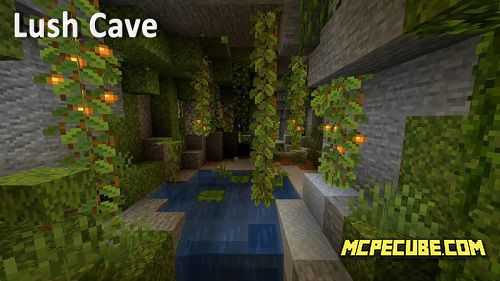 This is a new type of cave with a lot of different plants. At this point, a large number of new blocks are generated:


The features of new cave biomes

This is the place where mobs like Axolotls spawn. Such places will generate reservoirs with a bottom that consists of clay. Part of the caves will be covered with moss. 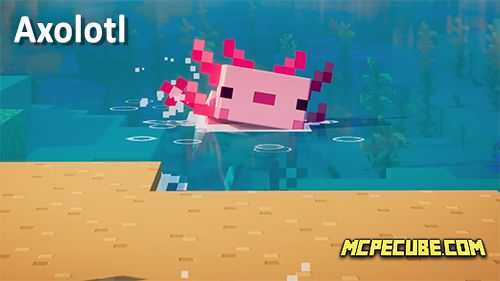 Deepslate is generated at a level from Y level -1 to -65. Lights start to dim when the Wardens are nearby. 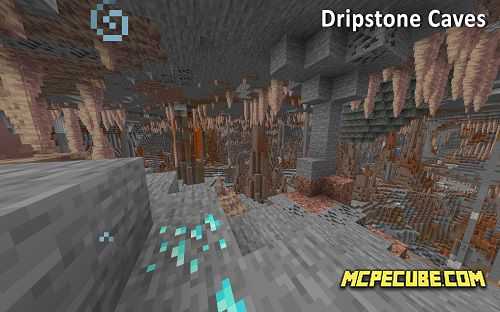 These stone outgrowths pose a danger to players and other living creatures as they can deal instant damage if they fall on you or you fall on them. The water falling from them can be picked up into the Cauldron.

Let's now look at the aforementioned hostile mob that millions of players worldwide already know, namely the Warden. This monster is similar to a minotaur and reacts to sounds, and this monster can also sense your fear. To survive in this cave and not meet this mob, you need to sneak and be extremely careful. 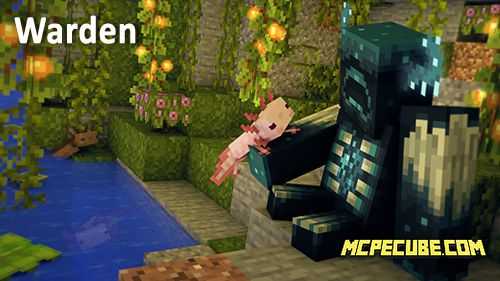 These mobs will only spawn in the Deep Depth biome. They are blind because of this they can not see anything and are guided in caves only by the sound that objects emit. This monster is hostile towards all living things. Its special growths on the head pick up vibrations and begin to move and glow. Can react to both snowballs and arrows with eggs.

Do not underestimate this mob as it can even detect invisible players! If it attracts attention for a long time, it will only follow the player. Has quite strong damage, namely up to 30 damage per hit. The movement speed is the same as that of the player, so you just can't run away from him, use tricks, or your agility. Has a luminous core on the chest.

The brightness depends on the environment. Emits a quiet sound that after the first meetings will always be a sign of danger to you. The frequency of the sounds accelerates when the Warden notices a player. This monster has 84 or more health points. The growth of this mob is about 3.5 blocks. 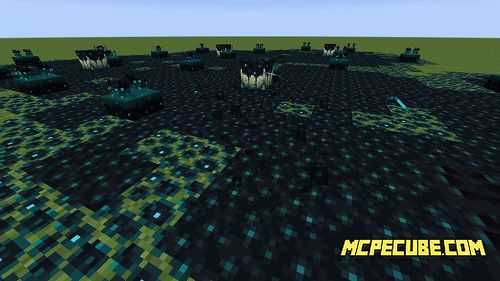 And the last information in this article but not the last in this update, are the different block types and items. The blocks of sculks and horns were added to the Minecraft world. Let's take a look at the types of blocks of sculk below.

The mentioned blocks themselves are the blocks that can be used by players to create wireless signals. Generated in deep places of depth and has a unique animated texture.

The first type of new block is called Trap. The new type of block is generating in the locations of the depths of the deep. It has a distinctive texture, namely a defined top texture that sets it apart from basic sculks and chute sculks. 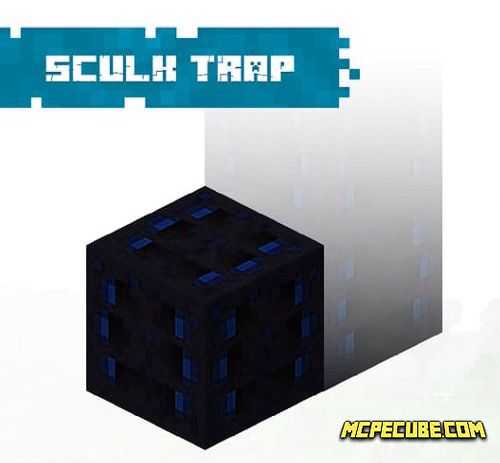 The next type is called Chute. It is a block of material similar to bone. The new blocks can be generating in the deep places of depths. Also, used in circuits. Please note that the block lighting does not illuminate the surrounding space. 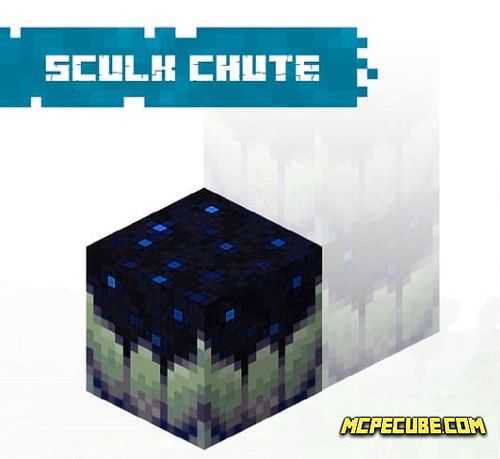 The third type of block is called Veins. These blocks are generated in layers like snow. Placed in different directions. It is also worth noting that players will be able to see other blocks under the blocks of veins of sculk. Also, used in wireless circuits.

And the last one is the sensors of sculks. This is another new block that gives players the opportunity to build wireless circuits. The new type of blocks is generating in the deep places of depths. It is a type of sensor that emits certain vibrations that also create signals. The mentioned wireless sensors do not respond if the player is standing or walking on the block of wool. 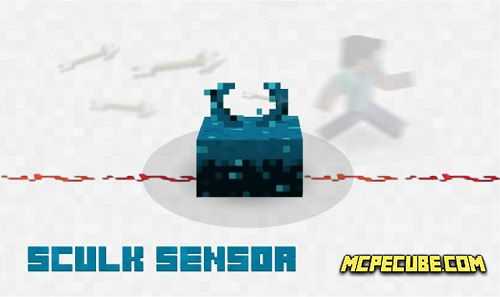 A new item called the Goat's Horn. Surely you already know what it is. But still, this is an item that is dropped after killing a goat. This item can also appear after a mountain goat crashes into some kind of solid block. A feature of this block at the moment is only the imitation of the sound of the beginning of the raid. No other functionality or usage has been added yet. 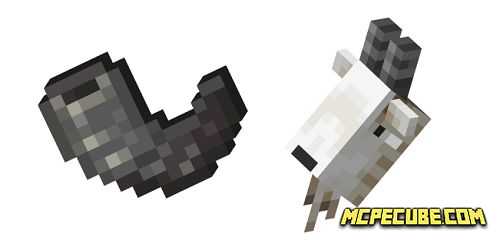 And the last thing for today is what all the players of the Minecraft world will soon be doing, namely Archeology!

To engage in this exciting process, players will need special brushes that will allow players to get ceramic shards. The shards can be placed on pots and burned. The shards can display such elements as the Ender Dragon, Skeleton, Alex, Tree, or Vindicator.