We are glad to present to all lovers and fans of the Minecraft world a new version of Minecraft 1.13.0.15 for Android. Mojang developers have made this version one of the most anticipated, as it is she who adds the most exciting function of Character Editor to the game! This function already works completely properly without any errors, crashes, and glitches. One of the additions to this is that this editor also works for Xbox Live.

Let’s take a closer look with you what has been fixed and added in this beta version of Minecraft.

As previously mentioned in this version of the game Minecraft Bedrock 1.13.0.15, the Skin Editor for your character was added and this time it is official. Recall that earlier it was already available but was hidden. From now on, players can use more than a hundred free additions to your skin, this also applies to both clothing and other in-game accessories.

The game developers fixed a number of errors, and also added a new ability to import skins!

What is a skin editor?

For those who have just started playing, or have little idea of what this is, we will explain. An image of how it will look in the game will also be presented below. The full-fledged work of this function begins with the Minecraft version 1.13.0.15. The new editor also adds a few additional features to the game. Any player has the opportunity to modify their appearance to one of a hundred available, we also draw your attention to the fact that some adds will be free (there are more than 100), and some will be paid. 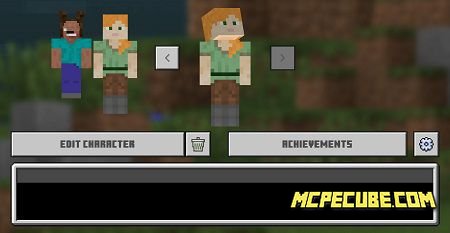 Paid will be only those parts of the body that will be considered unique, not the same as those standard ones that will be presented for free in the game. If a player wants something special, he can purchase any of the paid parts of the body, the same applies to clothes. The cost of paid body parts and clothing will vary from 1 to 2 dollars.

We draw your attention to the fact that the player can change not only the appearance of his character, as well as the sizes of body parts but also their shape. You can create a thin or thick, low or high character, whatever you want.

At the moment, this feature is only available in the Beta version of Minecraft, but will soon be available for all Bedrock platforms.
Let's take a look at the new Character Transfer feature with you.

This function allows the player to transfer his skin to another platform. Let's remember how it worked before, first you selected skin or your character in the Minecraft game store, then installed it and it was activated on all your interconnected platforms. From now on, this function will work with the Character Editor.

For example, if a player created a skin for his character on the phone and does not want to create a similar skin for the PC version again, but simply transfer it, all you need for this is just to do the following:

What has been fixed in the game?

Let's look at the most basic fixes in Minecraft PE 1.13.0.15. The list of the most important fixes in our opinion:

— The correct work of skins in the game;
— The farmer sells Suspicious Stew;
— Fixed display of craft in the recipe book;
— Fixed the animation of the heads of the mobs;
— Redstone can again pass through the block of the barrier.
Minecraft 1.13.0.15 for Android
minecraft-1-13-0-15-xbox.apk
Download free[87.39 Mb]