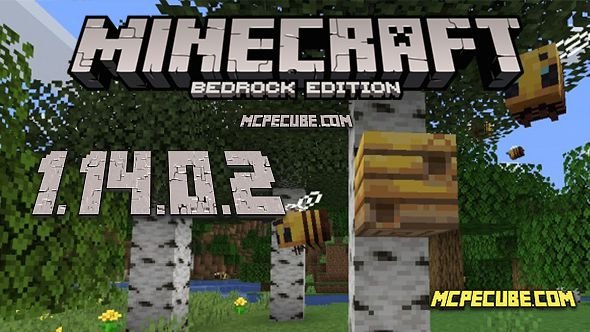 We present to you a new version of Minecraft 1.14.0.2 on Android. In the new update, players will see new mobs, an improved menu, a skin editor, as well as Baby Zombie Pigman. Let’s take a closer look at the new update that fans of the Minecraft world have already loved so much.

What new can we see in the new Beta version of Minecraft Bedrock Edition 1.14.0.2?

The new update, in general, brings a large number of changes to the Minecraft world, both simple and global. Mojang developers fixed all previously existing errors in the game and added a large number of new content to everyone’s favorite game world, namely new mobs such as bees, beehives, honey and much more! 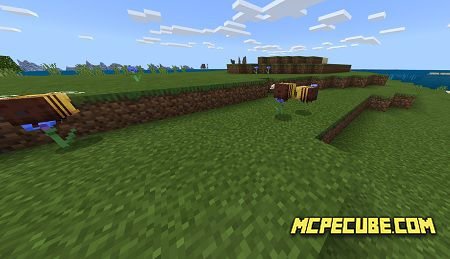 The first thing we will consider is Mobs:

Bees received the most corrections and changes. This made them more realistic. All players already know that these mobs are hiding in their hives and nests at night and in the rain. However, now, if anyone tries to set fire to their nest, the bees will fly out no matter what time it is.

Also, bees are now able to get angry if anyone is trying to take their hive. The player can only avoid this if he takes the Silk Touch tool.

Attention: Bees have become better at protecting their honey, so it will now be harder to steal it.

Previously, a bug was detected with the spawn of the bees, when they appeared, they were stuck in the foliage of the trees. From now on, bees will appear only where there are blocks through which the player can go.

Fixed sword texture in Baby Zombie Pigman. From now on, the texture of the sword is shown in the hands of this mob, and not at its throat, as it was before.

Gameplay, this is the next thing we will pay attention to:

From now on, the recipe for crafting a block of honeycombs in Minecraft 1.14.0.2 corresponds to the recipe from the PC version of the game Minecraft (Java version of the game). The player can craft this type of block using 4 pieces of honey. The sound of the honey block was also changed, from now on it has the sound of not mucus, but a stone block.

The block will not stick to the block of mucus when trying to interact with the piston mechanics.

The same behavior of all mobs when trying to jump to the honey block. 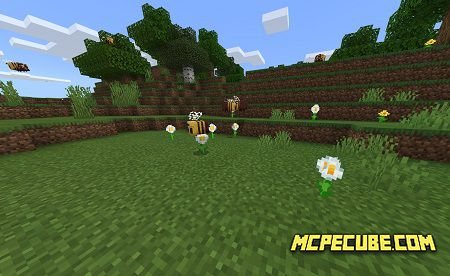 The next thing we will consider is Graphics:

The developers changed the background in the main menu, from now on it will be the same as in the Java version of the game. It also changed and the texture for the honey block and mucus.

They removed one of the most unpleasant bugs, the disappearance of the chest, they became invisible.

Also, fixed a bug where during a flight using Elytra the player’s hand disappeared.

Correct display of animation of objects that the player will pick up in the first person.

And the last, no less important today, is the Skins Editor:

As previously mentioned, with the release of the new version of Minecraft Bedrock 1.14.0.2, the Mojang developers have fixed not a small number of errors, and also added new features for editing your character.

One of the main problems in the editor was the flickering of the user interface when navigating.

Fixed a bug due to which some models were not displayed correctly.
Minecraft 1.14.0.2 for Android
minecraft-1-14-0-2-xbox-servers.apk
Download free[86.82 Mb]