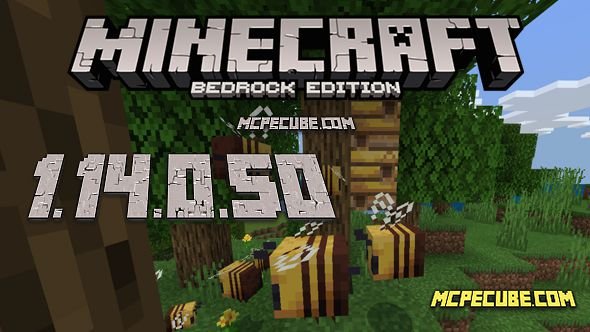 We are pleased to present to you the new Minecraft BE 1.14.0.50 update! The new update for Android is already available for players in the Minecraft world, fixes, bees, blocks and much more await you in this amazing world and in the new game update.

In this update, the developers of the Mojang studio turned their attention to a large number of errors that had a very negative effect on the gameplay. In the new Minecraft 1.14.0.50 update, all errors have already been fixed, and also, bugs were found that affected the visual part of the game.

Before we provide information about the new update, let's quickly go through the basic Minecraft BE 1.14.0 update. This is a global update that has added a large number of innovations to our beloved Minecraft world, such as new mobs, blocks and much more. Surely many players already have an idea of what a new update is!

These are new and very cute mobs that have their own unique behavior that is not comparable to anything else. In some cases, we can say that they are even smarter than the usual villagers, although both of them are quite primitive in their own way.

These mobs live by the same principle as in real life, namely, they collect nectar from flowers and thereby pollinate them. In the process of all this, your favorite honey is produced. In the new global update, honey is one of the important items for crafting.

Bees live in their hives or in nests, these are their houses. From their house, you can get one more thing that will be useful in crafting new blocks, namely bee honeycombs. You can get them by clicking on the hive or the nest using scissors. 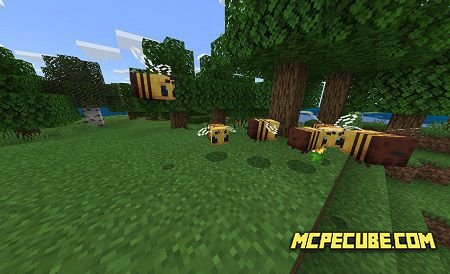 In the new Minecraft PE 1.14.0.50 update, several more new blocks have appeared. A honeycomb block, this block is used as decoration and is considered generally decorative. To create it, the player will need four small bee honeycombs. This block is very unusual and beautiful in its own way. You can safely use it for construction or to create any kind of creative houses, rooms or any other objects. Turn on your creativity and create masterpieces. 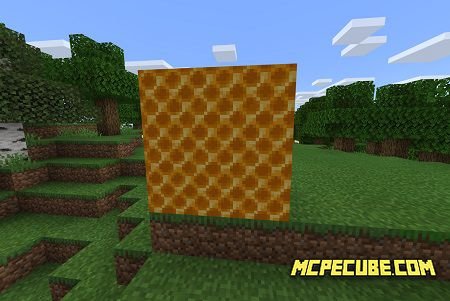 A block of honey is not just a block, but a block that brings new mechanics to the Minecraft world. It has its own peculiarity, namely, it sticks or can be said to be able to connect nearby standing. This feature resembles a block of mucus by this feature, but nevertheless, they have a different effect on the objects standing on them and near them. Please note that it does not connect with a block of mucus. This opens up new possibilities for players in Redstone schemes.

As previously mentioned, a block of honey is able to adhere to a nearby object, whether it be a mob or a player. The height of the jump is reduced, as well as the speed of movement. Only using cheats or a special second-level potion can you avoid this. 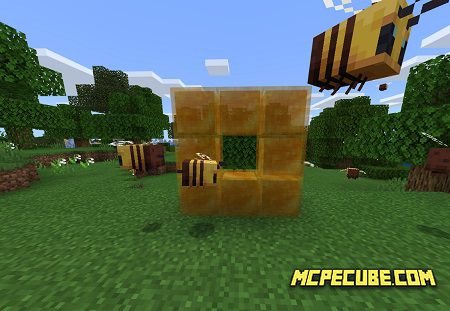 And now the most important thing is the Character Editor!

In the new version of Minecraft 1.14.0.50, a large number of errors that were associated with skins were fixed. Two serious bugs were discovered. Let's look at them:

1. The problem with the character display in the game. Fixed a bug in which a player using skins from the Marketplace could see a character model that was not correctly displayed;

2. Problems with the cloak in the game. The player who took off or put on a cloak, after that was forced to restart the game. In the new Minecraft 1.14.0.50 update, the player no longer needs to do this.

The bug that occurred when moving the skins to the Minecraft Earth game was fixed. Attention, this is not relevant for the CIS countries since the game is not available there.

The Character Editor has been optimized so as not to load the server. This was done by reducing the download size of the skins, which further increased the FPS on the servers.

Fixed a bug that occurred when using the Bucket with milk. This error was discovered by players in previous versions of Minecraft Pocket Edition.

Sometimes there were problems with milking the cow. The cow simply did not milk and milk did not drink, although the player was shown an animation of drinking at that moment. And also milk could not be used for crafting cakes. All of this has been fixed in the new Minecraft 1.14.0.50 update!

And the last mistake that the players found was a bug with Sugar Canes. It could break if there was no water nearby. This problem could occur if Cane was standing next to blocked access to water, for example, when a half block or steps are located in front of it.
Minecraft 1.14.0.50 for Android
minecraft-1-14-0-52.apk
Download free[90.1 Mb]