Yesterday the developers of the Mojang Studio released a new Minecraft Pocket Edition 1.16.100.59 update for Android with a working Xbox Live with updated biomes, mobs, blocks, and more.

We present to you a new update that Mojang developers have released today with new fixes Nether updates. In Minecraft 1.16.100.59, they fixed many important bugs that interfere with a comfortable game.

The first thing we will look at is a biome made up of red-scarlet blocks, namely the Crimson Forest.

In Minecraft PE 1.16.100.59, one of the new biomes that received minor fixes is the Crimson Forest. This forest is shrouded in red, which creates a mystical and eerie atmosphere in the location. This biome has its own inhabitants, namely Hoglin and Piglin. Both mobs are aggressive and hostile towards players and attack them as soon as they see them. But unlike the Hoglins, the Piglins will not attack the player if he is using gold armor. This is explained by the fact that these creatures are very fond of gold. Another feature of these mobs is that they can trade with players for gold.

As for the Hoglins, these creatures are terribly afraid of tree-like structures that generate in the Nether, namely warped fungus, when they see it, they immediately scatter. On the other hand, players can use crimson fungus to breed them. 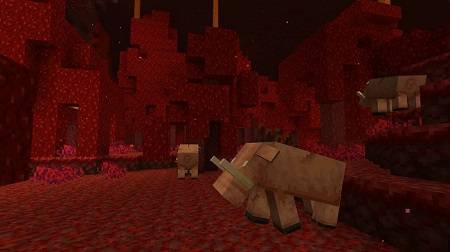 Another feature of the Nether World is a special block called Lodestone. This is a new interesting and unique block added to Minecraft PE 1.16. The purpose of the Lodestone block is to change the functionality of the compass. As it has already become known, the compass serves to indicate to the player the place of his respawn. However, after the action of the Lodestone block, this device begins to point to the block itself, and not to the respawn point. Thanks to this, you can mark various points throughout the game world.

If the player enters another dimension or breaks the Lodestone block, then the compass attached to it will begin to rotate non-stop in different directions. Lodestone can be crafted using eight Chiseled stone bricks and Netherite ingot. 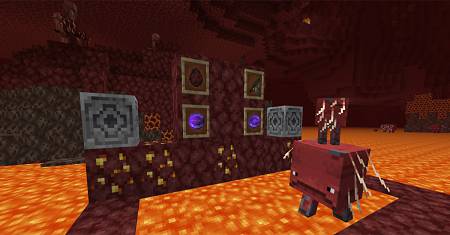 Next to the structure of the Ruined Portal, players can always find a chest with useful items. Sometimes the player can also find a block of gold here. Also, the Ruined Portal is surrounded by Stone bricks, Netherrack, Magma Block, and lava. This is where the Crying Obsidian is generated, which is used to craft the Respawn Anchor.
Minecraft PE 1.16.100.59 for Android
minecraft-1-16-100-59.apk
Download free[124.05 Mb]