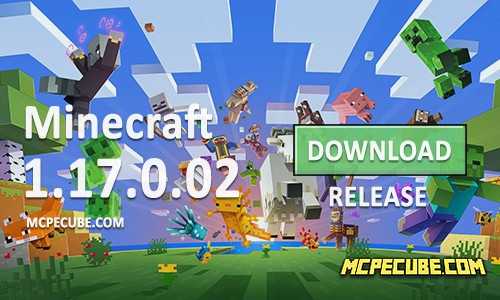 Did you know that the Caves and Cliffs update was divided by the developers of the studio of Mojang into two parts? This decision was made in order to refine all the necessary game aspects in more detail. That is why today we present you with the Minecraft PE 1.17.0.02 update, which is the official first part of the full Caves & Cliffs update! The long-awaited release of the Minecraft 1.17 Caves & Cliffs Part I update, for all mobile devices, Windows 10 users, and consoles! The new update Minecraft PE 1.17.0.02 is already available to all users of Android operating systems and users of Android devices, and a new update is also presented with a working Xbox Live.

Let's take a look at the features of the new update below.

As mentioned earlier, the new Minecraft Pocket Edition update 1.17.0.02 is the first part of the full Caves & Cliffs update. In the new update, mobs such as Axolotls, Octopuses, Goats have been officially added, as well as many new items and blocks. Many game features are available to players without additional Caves & Cliffs settings.

We talked more about all the features of the update in the article on Minecraft 1.17!

In the new update, you will find such features as:

The first feature that, in our opinion, is worth paying attention to is already everyone's favorite mobs, which are called Mountain Goats. Now new types of mountain goats have been added to the Minecraft world, namely Screaming goats.

These mobs spawn quite rarely, with a chance of only 2%. Outwardly, Screaming goats do not differ from normal mountain goats, but you will know exactly where which one, since it has one very funny feature, namely that it will scream and butt loudly, so be careful! 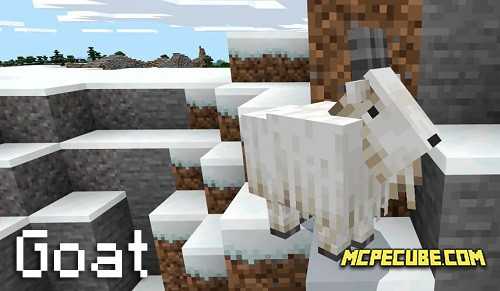 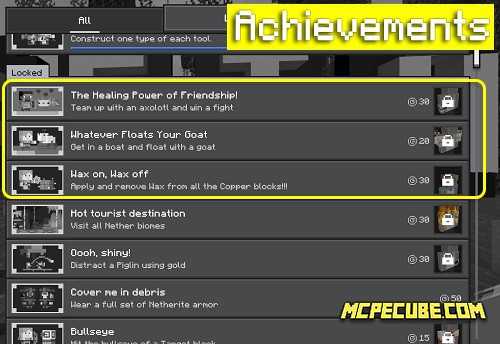 The developers made sure that the players did not get bored during the game. Below we will tell you how to get them:

The next feature of the new update Minecraft Pocket Edition 1.17.0.02 is the Panorama menu. This feature changes the background of your main menu. New caves are now displayed there. It looks very nice and unusual.

The new release is new bugs, the developers of the Mojang studio warned the players about the following game things:

1. The update size for iOS devices exceeds 200 MB, which exceeds the download limit over the cellular network. The update can be downloaded via Wi-Fi connection;
2. Previously players do not receive invitations from other players from their friends to the game exclusively on Android devices;
3. Fixed the issue related to the players that are using the Nintendo Switch, they were not able to join the saved servers;
4. Players who are using Windows 10 and upgraded to the version of 1.17 (with certain graphics cards) may be faced with an issue which is a Black Screen issue when launching the game world.

The new update is one of the few updates in which a large number of different bugs have been fixed. In general, about a hundred different bugs were fixed that affected the gameplay and the game as a whole in different ways. Most of the bug fixes are aimed at fixing bugs that interfered with the gameplay. Also, the developers of the studio Mojang turned their attention to the performance of the game.

The game client has become much more stable, so the game has become more comfortable and without interruptions.

Let's consider below a small part of those fixes that, in our opinion, may be of interest to you:

1. Importing skins works again and is available for users of Android devices;
2. The visibility in groundwater has been improved. Players will now see better underwater;
3. Minor changes to the main loading screen;
4. The textures of the clock, compass, and some ores have been changed;
5. New sounds have been added during burning or freezing;
6. The sound of using material such as bone meal has been changed;
7. Loot from the Drowned has been changed. They will now drop copper ingots instead of gold bars.
Minecraft PE 1.17.0.02 for Android [Release]
minecraft-1-17-0-02-xbox-servers-release.apk
Download free[121.29 Mb]