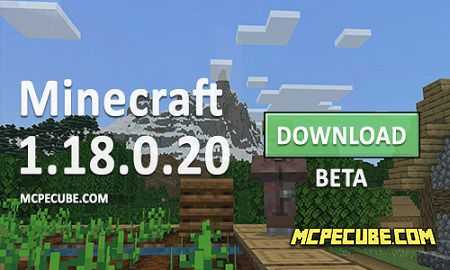 And here is the full release of the Minecraft PE update! The new version of MCPE 1.18.0.20, which we have all been waiting for! Mojang developers have released the new beta for MCPE 1.18. In the new update 1.18.0.20, the developers have changed the Caves and Cliffs mode, also updated the world generation, fixed more than twenty different bugs, and made seven technical changes.

All this and much more is already available to all users of Android operating systems and Android devices.

Let's take a closer look at the description and new features of the new update below.

As mentioned above, the developers changed the mode of the Caves and Cliffs, also updated the generation of the world, fixed more than twenty different bugs, and made seven technical changes.

The first thing we will look at is the Caves and Cliffs!

Now the player no longer needs to activate the Caves and Cliffs slider. This mode works automatically. We also draw your attention to the fact that a copy of the world is not created by default! An experimental setting called Custom Biome Creation is not working in this version yet, but this issue will be fixed shortly. From now the large trees will grow again below the Y = 0 level. Also, small dripleaf can now generate correctly in Lush Caverns.

The second feature of the beta update is an equally significant game aspect such as Minecraft generation.

Nine new changes were added to the game, namely in the generation of the Minecraft world. 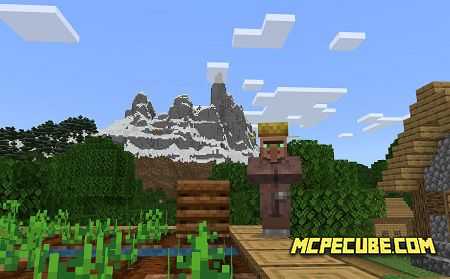 1. Former caves from now on can even reach the highest pick namely the surface of the earth;
2. A bug related to the water that previously was floating inside the caves has been fixed;
3. Meadow flowers do not replace building blocks located in villages;
4. Now tuff is generated below the Y = 0 level in Mineral veins;
5. Deepslate is no longer generated above Y = 0;
6. Amethyst geode generates correctly all over the Minecraft world;
7. The tops of the mountains will now be sharper;
8. The transitions between new and old chunks have been improved;
9. Mine tunnels do not replace Bedrock.

Now, the change that is probably expected the most, of course, if you do not take into account the game content associated with the caves, namely the Parity of the mobile version of the game with the Java version of Minecraft.

In total, Mojang made seven fixes for the parity of the game versions.

1. Changed the frequency of the generation of ores;
2. Changed the generation of the caves;
3. Placements of certain minerals have been updated;
4. Now if the player goes far, the pillagers will disappear after the end of the raid;
5. Changed the color of the raid progress bar to red;
6. Vindicator no longer take part in pillager patrols;
7. New feature, now the number of players lying on the bed will be displayed on the servers.

In Minecraft, the background of the menu has been changed. It will now temporarily match the Halloween theme. Now everyone is preparing for this long-awaited day!

In general, Mojang fixed twenty-three different bugs that somehow interfered with a pleasant game. Below you can see a list of the most significant fixes of this update:

1. Fixed a crash from servers due to different block identifiers in the game;
2. Optimized vine placement time;
3. Now the Nether world portal updates the location when moving in one of the dimensions;
4. The spawn of ghost fire after the destruction of a block under fire has been fixed;
5. When you enter the game, a recommendation appears to change the loading range of textures;
6. Updated texture loading range settings;
7. The blocking of visibility when riding a minecart in previous worlds has been fixed;
8. Updated item loading;
9. Enchanted items will no longer be invisible in the Nether world;
10. Mobs will correctly pass through the hatches;
11. The animation of the axolotl has been improved;
12. The bush of sweet berries now deals damage to mobs;
13. Mobs will no longer try to go through a bush of sweet berries or campfire;
14. The work of the structural block has been corrected;
15. When searching for non-existent items, the player will not receive any results;
16. From now the well-known effect called the Village Hero can be saved outside the village. This effect applies to all players who fought the pillagers.

And the last no less significant change concerns the technical part of the Minecraft game. In general, we added seven technical changes for the development of add-ons and testing in Minecraft!
Minecraft PE 1.18.0.20 for Android
minecraft-1-18-0-20-xbox-servers.apk
Download free[134.49 Mb]