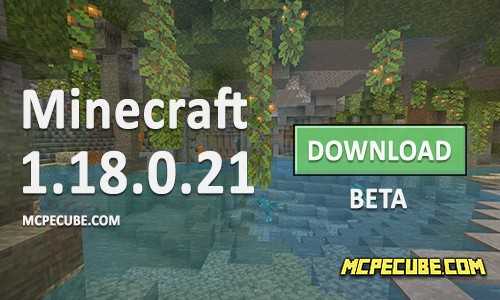 A new week can only mean that it's time for a new update. The new update of this week is the release of Minecraft PE 1.18.0.21. Mojang developers have released a new test version for all users of devices that operate using the Android operating system. More than twenty bugs were fixed in this update, ten new changes, and five technical changes were made. But this update has another feature that this time plays against players.

The fact is that the players encountered problems during the installation, which you will learn about below.

Let's now find out more about all the new changes that this update gives us.

As mentioned above, old and existing worlds are no longer displayed correctly in the game, this is due to the fact that worlds, mods, and other game aspects are stored in the Android / data / Com.mojang folder. In order for the player to see the lost worlds again, you need to copy the contents from the /games/com.mojang/ folder to the /Android/data/com.mojang.minecraftpe folder!

In total, ten 10 new updates were added. You can see the new changes in the list below:

1. The distribution of ore in the veins of the world has been updated;
2. The relative size of biomes has been changed to match the Minecraft PE version 1.17;
3. The average size of biomes has been increased. Due to this, biomes have changed their location;
4. The frequency of generation of underwater magma has been increased;
5. The number of treasures has been increased. Especially those below zero;
6. Villages will now be generated more randomly and in different locations;
7. Monsters such as zombies and drowned men will now spawn in Dripstone caves;
8. Now mountain goats will not spawn on rocky peaks;
9. The frequency of generation of lava and water sources has been updated;
10. Also, the drops will now cause a splash effect.

We pay special attention to changes related to the game menu.

The developers of Mojang removed the previously added Halloween background to the game and added mountains in the new update. This is strange since the holiday has not even come yet and unfortunately, these actions are not accompanied by any comments from Mojang, perhaps this is a temporary solution.

As mentioned earlier, the new update has more than twenty bug fixes, namely twenty-four. Let's take a look at the main bug fixes below:

1. Biomes will not change from height if it will be not a cave, now there are no savannas in the sky!;
2. Bugs with aquifers have been fixed. Because of this, the location of the aquifer has changed.
3. Gravel will now generate below zero level;
4. The offset of chunks has been fixed;
5. Colored pillars will again be generated in the Wasteland;
6. Strange pillars are no longer generated in the Wasteland;
7. Transitions of locations in snowy biomes have been changed;
8. Shadows of lightning have been removed;
9. Snow blocks and snowy turf have the same color shades;
10. Copper ore no longer floats in ravines;
11. Players can again get Nether sprouts on the crimson nylium, but only if they use bone meal;
12. Now from copper ore drops from two milking five blocks of untreated copper;
13. On the stone cutter, from a copper block, you can get four units of a carved copper block;
14. The player's hitbox after using the elytra has been fixed;
15. Flight using elytra is not interrupted by hitting the wall or receiving any damage;
16. Ender Pearls will no longer be generated as a Glow Stick in Forest Mansion chests;
17. Tropical fish will now spawn in lush caves again;
18. We returned to the game a function called Always day, it is available in the world settings;
19. The animation for blocking the Shield is now smoother.

Also, in total, five technical changes were added to the game for the development of add-ons and testing in Minecraft.
Minecraft PE 1.18.0.21 for Android
minecraft-1-18-0-21-xbox-servers.apk
Download free[129.6 Mb]