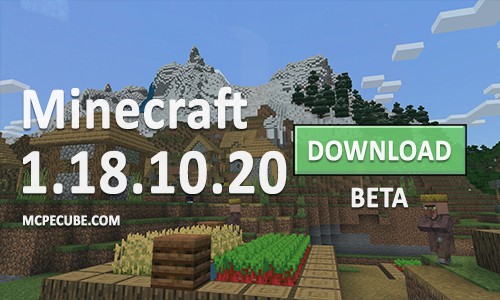 The developers again decided to please us with a new test version of Minecraft 1.18.10.20. This update introduces some changes and fixes a number of bugs that were interfering with gameplay.

In addition, remember, any worlds that you created in beta versions will not work in previous versions of the game, so always make copies so that you can keep them.

There were 42 new changes in total.

Further details about some of the innovations regarding the gameplay

1. Fixed a problem with transparency while recharging food.
2. Under the biomes of the Ocean and Swamp, the portals that have been destroyed will simply dry up.
3. The radius of the effect of the Frost Walker enchantment is now 8 blocks.
4. Restriction on the collection of glasses with items for residents-farmers, no more than 8 glasses.
5. Generation of mobs does not stop when the world is reloaded.
6. The player will be able to receive the Iron Belly award as before.
7. Fixed continuous spawning of objects in the Structural block.
8. From this point on, the player's character cannot inflict damage to himself with the help of enchantments.
9. Food again applies effects.
10. The problem with obtaining coins when the counter of the number of coins in the In-game Market was frozen.
11. The redstone signal from the records "Otherside" and "Pigstep" has been adjusted.
12. When the character draws the bow as much as possible, the bow shaking effect will be present
13. There will no longer be an additional "empty" element from the / effect command.

1. Water now flows around the edges of the block as it should.
2. Place a fire at the top of the lightning rod so that it cannot be set on fire.
3. Made changes to the width of the Walls under the Candles.
4. Added new animation of falling blocks (gravel or sand).
5. Blocks of Amethyst are not destroyed into Structural Blocks.
6. Amethyst Clusters now collapse correctly when a support block is destroyed.
7. Copper blocks and its elements are oxidized in the Nether dimension.
8. Big Dripleaf can only be placed in certain areas such as clay, mycelium, grass.
9. The player may place Pointed Dripstone only on the full edges of the block.
10. Glow Lichen are set in the right angle.
11. Blocks of magma will no longer do damage, provided that fire damage is turned off in the settings.
12. On Scaffolding, the player can use emotes again.
13. Fixed errors when reviving with the movement of the player's character.

1. Villagers, foxes and rabbits are now generated in the Frozen and Jagged Peaks territories in winter textures.
2. Fixed the appearance of goats in winter biomes.

1. Some bugs with the camera when using the elytra in bed have been fixed.
2. Adjusted lighting if there is no light source when the player enters the Upper World, from other worlds.
3. For equality of Bedrock and Java Edition versions, some textures of blocks and other items have been updated.

1. The Achievements button is available again when scrolling up while paused.
2. In the pause mode, some buttons have changed, now they have a white frame.

1. Mesa and Frozen Ocean biomes are now properly spawned in Realms.
2. Between level zero and level four, a layer of deep shale is now generated when updating old worlds.
3. Deep Copper Ore can be found in Dripstone Caves.

The developers have added 35 changes to the new version related to the development of add-ons and testing in Minecraft. Also, some changes have improved the productivity and stability of the game.

The main ones are: