With the release of the full Nether update, players began to actively create themed addons that make the Nether world more and more interesting for adventures. We present to you a new addon that adds new entities to your Nether world. New creepy entities called Blazes. All blazes will be added to different Nether World biomes, each of which will correspond to a specific biome. For example, warped blaze, soul blaze, crimson blaze, and ash blaze.

For those who have not heard of creatures like blaze before, these are hostile mobs that live in the Nether world. These mobs spawn from the special Monster Spawner, which can be found in Nether fortress, as well as simply in the territory of these fortresses in low light levels. Using the new addon, these entities will be spawned in certain biomes that correspond to them. Unlike all other mobs, blazes do not have a body, but only have a head that is above the smoke in the air. Around the smoke body of this creature, you can see how four sections are turned, each of which consists of four oriented vertical rods.

Kill these creatures to get their rods that they drop after death. Having collected the required number of rods, players can craft a new type of powder. Use new powder to craft a golden enchanted apple.

Be careful as these entities are strong enough. Each type of blaze drops the corresponding type of rod and powder. Already existing creatures such as the Piglins and the Hoglins avoid blazes.

To craft a new type of powder, the player first needs to craft a simple sack, use one String and three leather, the crafting recipe is below: 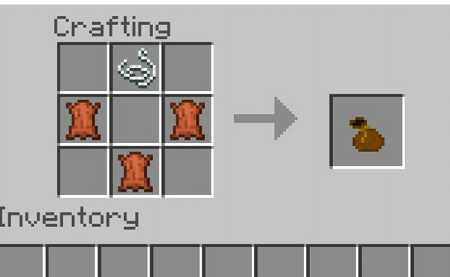 A new type of powder in the sack. The new powder is called Ultimate powder. In order for you to craft this, you need to have an empty sack, all types of powder of different types of blazes and craft table. Craft Recipe Below: 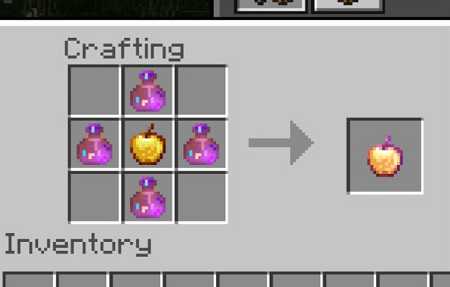 And the last one is a special item called the Golden Enchanted Apple. In order for you to craft it, you will need four sacks with ultimate powder and one golden apple. Craft Recipe Below: