Have you used an add-on like Weeping Angels before? If not, then it's time to start doing this, since this add-on adds new creatures to your world that have a unique appearance and some other features that you will learn about below. For those who have previously used this add-on, it will be interesting to know that this version of the add-on is an improved version from the developer.

Weeping Angels have now been revamped to look like they are closing their eyes all the time, and new mechanics and other minor changes have been added that make for very interesting content overall. Let's take a closer look at all the features of this add-on below.

How it works and the features of the add-on

As mentioned earlier, this add-on adds new creatures to your world that have a unique appearance. Weeping Angels are now changed and look like they are closing their eyes all the time, new mechanics and other less significant changes have been added, which in general make very interesting content. 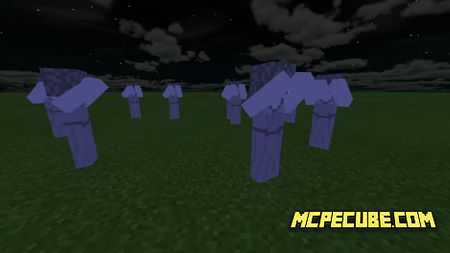 These mobs move when you do not see them or do not observe them.

Please note that these creatures will follow you, so be careful. If this mob overtakes you and touches you, you will be teleported to a random place at a distance of up to 128 blocks.

Also as mentioned earlier, the Weeping Angels models are now changed to look like they are closing their eyes all the time, this is one of the unique changes that make these models a bit creepy. Improved mob textures.

In the previous version of the add-on, when this mob touched the player, he died, now you will simply be teleported to a random place. Let us remind you that when you look at them or observe them periodically, they cannot harm you.
Weeping Angels Add-on 1.17+
improved-weeping-angels-speed-and-sound.mcaddon
Download free[631.18 Kb]