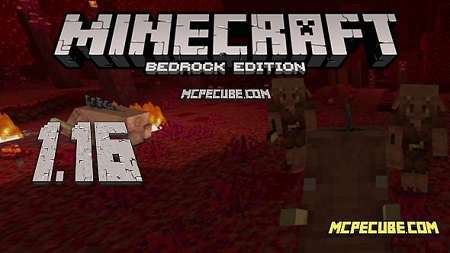 Finally, all players can see the long-awaited Minecraft Bedrock Edition 1.16 update. In today's article, we will tell you about a large number of innovations that will be added to everyone's favorite Minecraft world. This update will be available soon. Unfortunately, at the moment, the developers of the Mojang studio are engaged in solving possible issues that are related to the correspondence of the mobile version with the PC version of the game.

The new version of Minecraft BE 1.16 is called the Infernal Update since the infernal dimension is a dimension which is called The Nether which looks like a huge cave similar to Hell, with creepy mobs full of Netherrack (type of stone / solid block) locations, objects, lava, and items. This location has not been updated for a long time due to which many players have lost interest in this place. With the release of the new update, everything will change!

Let's look at the new update.

Below we will consider all the innovations with you, and begin with the creature that lives in this biome.

The first creature to which we turn our attention is a neutral mob called Piglin. But they are not neutral in all cases if the player wears gold armor, these creatures will be neutral to him, if not, they will be hostile to the player. This creature has the head of a pig and the human body. Nobody knows where they came from, but they live in the dimension of The Nether.

Spawn only in The Nether. They love gold very much. As mentioned earlier, they are hostile to the player, except when he wears gold armor. The main thing you need to know is that it is not recommended to touch the Piglin chest, otherwise, you will be in danger and even your golden armor will not help. If you know for sure that you can easily fight these creatures, then you can try.

Spawn either with a sword or with a crossbow. Players will be able to trade with these creatures. Hostile also to Wither Skeleton and Hoglin. If somehow it gets through the portal to the upper world, namely, The Overworld will turn into a Zombie Pigman. In the Nether dimension, they have their own structures with chests. Piglins can open doors. See how new creatures look below:

Another creature we talked about above is Hoglin. This creature is very similar to wild boars. Before introducing a new creature to Minecraft and all players, the developers of the Mojang studio conducted a survey on how to name this creature and from all the proposed names, the name Hoglin was chosen.

See how new creatures look below:

A new ore has been added to the Minecraft world which will now be a great competitor to Diamond ore. This is Netherite Ore. What needs to be done so that the player can get this material? To do this, you just need a diamond pickaxe. But be careful, as there is little difficulty in mining this ore. If a dropped ore touches another ore, it will disappear. Get Ancient Debris and smelt it, this is necessary in order to get Netherite Scrap. Players must use Netherite Scrap to reforge with gold. Only after this, you will have quality Netherite ore. Crafting recipes see below:

Important: Remember that this ore can only be used with Diamond. You cannot use this material separately. All items improved by this material will become stronger. The main advantage of it is that this material does not burn in lava. See examples of recipes below: 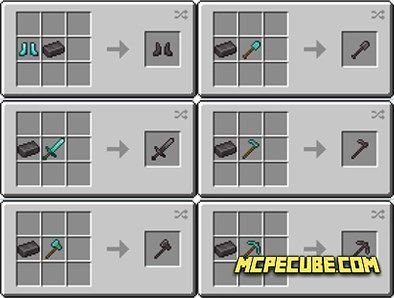 In the updated Nether dimension, three new biomes will appear, such as Crimson Forest, Warped Forest, and Soul Sand Valley. 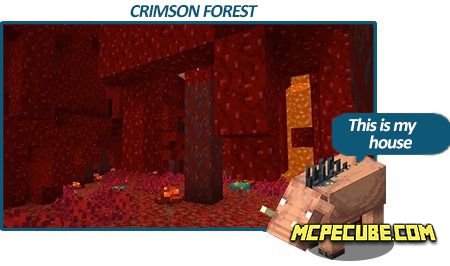 Warped Forest is another type of biome that has been added to Nether. This biome consists of blocks of blue-turquoise color. Also, an interesting and fascinating biome with a lot of interesting structures. 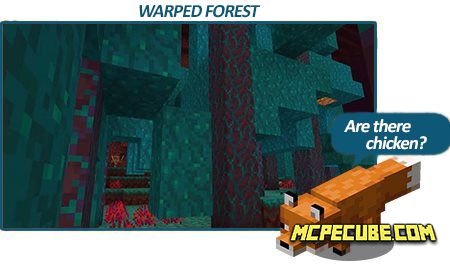 And the last biome is Soul Sand Valley. This is a biome that is a large cave that consists of sand and a Soul Soil block. A very exciting place with a lot of interesting structures and blocks. 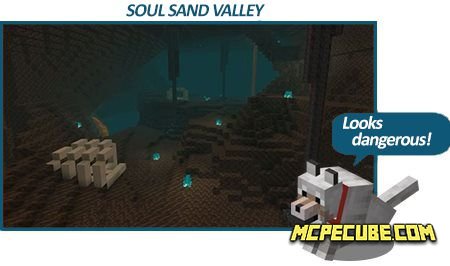 Let's look at the new blocks that we will see in the updated Nether dimension.

2. Soul Soil: this block is very similar to a sand block, but unlike sand, Soul Soil does not affect the player’s movement speed. If you light a fire on it, it will have a blue color;

3. Blue fire: this fire can cause a player double damage. It will burn until the player extinguishes it. If you light a fire on Soul Soil it will be blue;

4. Fungi: new types of fungi, such as warped fungus and crimson fungus. Generated only in Nether;

5. Roots: a plant block that is presented in the game in two variations, such as warped root and crimson root, and there is also another type called Nether sprouts, this plant block is generated only in Warped Forest;

6. Target: if you get into this block with an arrow or a trident, it will start working like a Redstone block. The closer you get an arrow or trident to the center of the target, the more powerful the signal;

7. Nether Wart Block and Warped Wart Block: the types of blocks that you can see in Nether in blue and red, each of which is generated in its own biomes;

8. Nylium: a new type of block which is also presented in two types such as crimson and warped. This is an analog of grass in the upper world of Minecraft;

9. Weeping vine: this is an analog of Vine, grow on trees in the Nether dimension;

11. Basalt: this block is generated in the Basalt pillar (a high structure that consists of basalt).

And much more! You can find more detailed information about new blocks and innovations here. 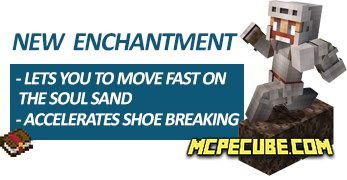