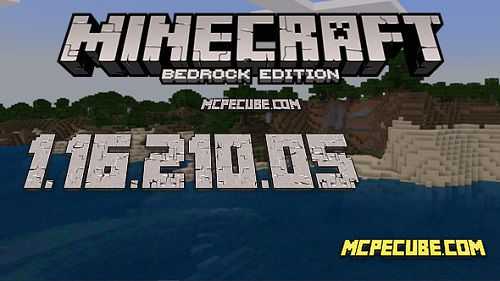 This week, the developers of the Mojang studio decided to present the release of the new update a day earlier than usual, so meet the new full update for Minecraft PE 1.16.210.05! This is a new complete update for all users of the Android operating system. The developers have released Minecraft Pocket Edition 1.16.210.05 to improve stability in the game and have made more than 100 different changes and fixes!

Let's take a look at the features of this update below.

The first thing to note in this update is Vanilla Parity. Mojang continues to work on parity with the PC version of Minecraft Java. The developers have made several changes:

1. From now the sounds in the Nether world have been fixed and updated;
2. In order to hear new sounds, players need to install a music pack, namely Minecraft Original Music pack;
3. The use of bone meal in the ocean creates only underwater plants in the form of algae.

New sounds make Nether world a more creepy and scary place for adventure, so we recommend using the available sound pack for a better experience. Players can download the Minecraft Original Music pack from the Marketplace for free.

In general, we have identified the most significant three aspects of the changes:

In total, the Mojang developers have fixed 74 bugs. You can see the most interesting things below:

1. Now players can use for crafting such an item as Ink Sac, obtained from the Wandering Merchant;
2. Fixed crashes in the game;
3. Fixed work with .mcstructure files;
4. Now players will not receive fall damage when opening the Shulker Box;
5. Please note no the same seeds will generate for the chests the same contents;
6. Mobs can again attack both high and low enemies;
7. Fixed a bug due to which Parrots constantly flew up;
8. Fixed animation of Ender Dragon;
9. Foxes can pick sweet berries again;
10. Fixed work of TNT in water;
11. Improved Screen Reader function;
12. Improved the smoothness of the animation of switching in the menu;
13. Added new and updated existing tips on the loading screen;
14. Golden Apple has colored text on the quick selection bar;
15. Updated the screen of Achievements.

Also, the developers of the studio Mojang paid special attention to the console commands. In total, Mojang made 12 changes. The main ones are listed below:

And the last thing in this update is Technical Changes.

In total, Mojang made 26 changes. Most are related to the development of mods. You can find out more information in the official changelog. Also, the developers have updated templates for addons: