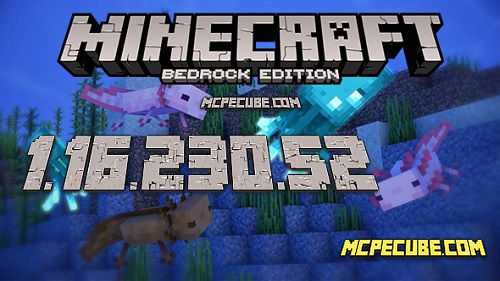 If you have not seen it yet, we present you with a new test update for Minecraft PE 1.16.230.52. The new Mojang update was presented last night and this time the developers added cute Axolotl mobs and a new block that is called Deepslate that is similar in properties to a stone. In addition to the new mob and block, some changes and fixes were also made in the game. Please note that the new update is already available to all users of Android operating systems. Let's take a look at all the features of the new update Minecraft PE 1.16.230.52.

One of the main features of the new update is a friendly water-dwelling mob called the Axolotl. A new underwater dweller that will spawn in water underground temporarily does not spawn naturally. Let's take a look at the features of this mob. 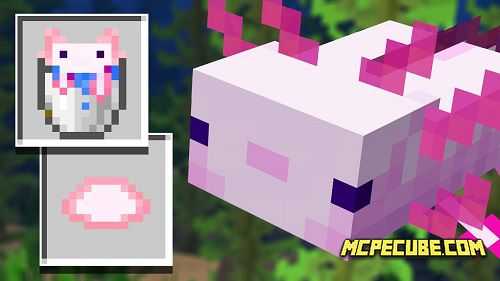 The first is that these mobs are very fond of buckets of tropical fish. Please note that players cannot tame Axolotl, but at the same time, players can breed them using fish, just feed them fish. It is also important to know that players can make these mobs follow them, for this, you need to use a bucket of fish, just hold it in your hands and the Axolotls will follow you.

Another feature of the new mobs is that, unlike other underwater inhabitants, the axolotl can move overland, but it is important to know that it can only walk on land for a few minutes. If he stays on land longer, he may die. Since it is a player-friendly mob, it only attacks mobs such as fish, squid, drowned, and the Warden.

New mobs spawn in different colors and spawn with the same percentage chance. Please note that the rarest type of axolotl is the blue axolotl. This type of mobs rarely spawns during breeding. These mobs are also great survivors, as when threatened they can pretend to be dead. While pretending to be dead, his health points are restored.

If the players kill the mobs that were attacked by the Axolotls, then the effect of Fatigue will be removed from him and the effect of Regeneration will be active. And the last thing is that players can catch new mobs in the bucket.

The next thing we will look at is the new block that has been added to the Minecraft world, namely Deepslate. The new block is generated in large quantities below Y=0 in Overworld. Between Y=0 and Y=-7 is a mixed layer of Stone and Deepslate. When new chunks are generated in the Minecraft world, mineral veins, caves, and other underground structures can form instead of Deepslate. As mentioned earlier, the new block is an alternative to stone. Also, this block has 28 different types and spawns below the block level: Y=16. 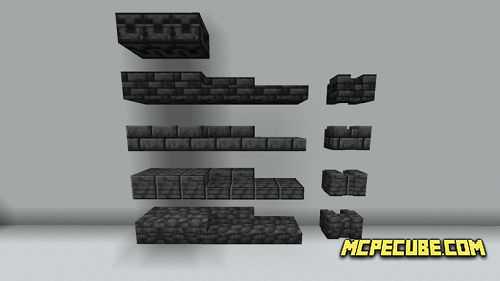 And the last one is the bug fixes of which there were a little more than 20 in this update. We also made ten changes for the GameTest Framework testing automation tool. Let's take a look at some of the bug fixes that were made in the new test update below:

1. Underwater visibility has been improved;
2. Players can wax oxidized copper blocks;
3. In case if the pointed dripstone was pushed by the piston, it will break correctly;
4. Moss block can block water;
5. Mobs can find a path that leads through blocks of moss;
6. Fixed bugs related to the screen reader function;
7. Now players can use buckets to pick up fish.
Minecraft PE 1.16.230.52 for Android
minecraft-1-16-230-52-xbox-servers.apk
Download free[131.1 Mb]