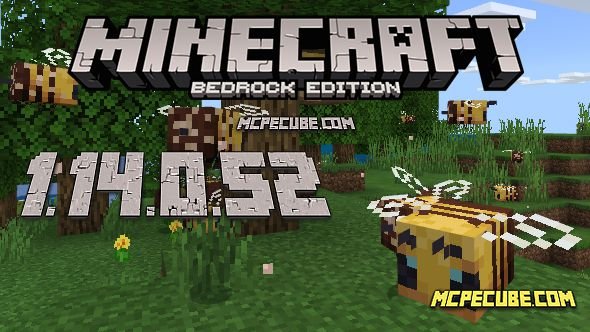 In the new beta version, the developers fixed bugs that were found in previous updates of the Minecraft game. Mojang fixed a fairly small number of bugs in the game, but all of them are significant enough and negatively affect the gameplay. Since the full version of Minecraft 1.14.0 added a lot of new items to the game, new mechanics, including mobs, players began to find more and more different bugs and errors that had a very negative effect on the gameplay and did not give players comfortable play in the world of Minecraft.

Let's take a closer look at everything about the Honey Update.

As everyone already knows this is a good enough and pleasant mob, they are neutral towards all players and will never attack first unless of course there is some kind of situation in which they will be forced to defend themselves. As in real life, these mobs are very useful, as they pollinate flowers and collect pollen, after which they produce honey in their hives.

You can find these mobs in biomes where there are flowers, for example, it can be a plain, flower forest or sunflower fields.
The player can tie any bee, and also breed simply by feeding it a flower.

Do not provoke bees, because, after self-defense, they die. Why? Many already know that after a bee stings its enemy, it dies as it loses its sting. After the sting is lost, the bee lives for 10 seconds, after which it dies, and the player who was stung by the bee will receive a poisoning effect.

What it is? For those who don’t know, these are the houses in which these cute mobs live. All hives are naturally generated in the Minecraft world. Please note that with the release of previous updates, the bees had a slightly changed behavior, which means that as soon as you want to touch their honey they will attack you. This is the case if you find hives of wild bees.

The player can avoid attacks by building hives. After that, these mobs will not attack you and the player will be able to easily collect honey. 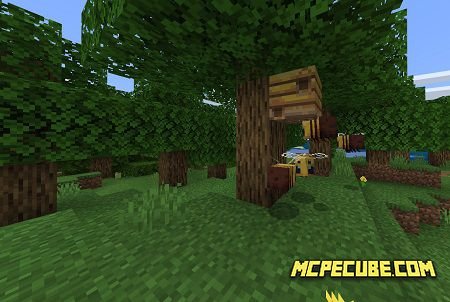 After that, the bottle will be filled with honey than you can drink to restore satiety. 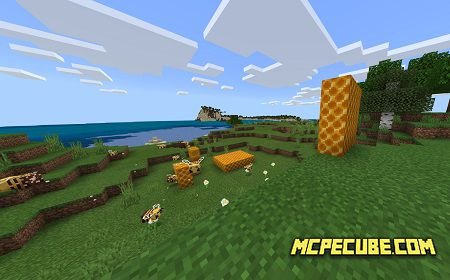 Players can use this item to create blocks of honey. This is a special block that has a unique ability, namely, all creatures that will stand on it will stick. The movement speed and jump height will also be reduced.

Players can take advantage of pillars of honey blocks as they reduce the speed of their fall. You can simply glide down on them, but as you already understood, climbing up on these blocks will not work. Do not interact with the mucus block. It interacts with the pistons on the same principle as the block of mucus. 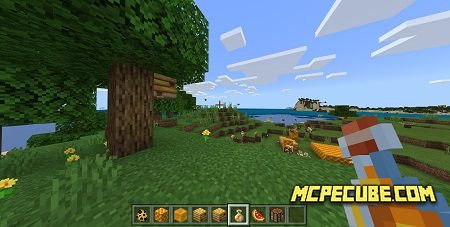 — The problem with entering Minecraft 1.14.0.52 using an Android account has been fixed;
— Regardless of which bee you attack, whether large or small, all bees will be angry and become aggressive towards the player;
— Performance has been improved in areas with a large concentration of players;
— Fixed incorrect display of some parts of the body in the Character Editor.
Minecraft 1.14.0.52 for Android
minecraft-1-14-1-2.apk
Download free[90.19 Mb]