A very interesting addon that adds new items to the world of Minecraft, namely new coins. Their player can use as part of the decoration or for some kind of role-playing games. Players can use these coins as in-game currency and use these items for trading between players.

In the game, you will see five new five-coin types. In order to get new items, the player must smelt a gold and iron bar in the furnace, after which he will receive a gold or iron coin. 1 ingot = 1 coin.

We also draw your attention to the fact that each coin, in turn, is equal to 9 coins of the previous level, for example, 1 gold will be equal to 9 iron ones.

Also, if you have already collected for example nine gold coins, you can turn them into a large pack of iron coins. This mechanism for converting coins of one type into another is made to make it easier for a player to store a certain type of coins in his inventory. In order to get a coin of the next type, you can use a bunch of the previous type when smelting in a furnace. Also, for example, a bunch of iron can turn into one gold.

This addon will be very useful and generally a great addition to your role-playing games on servers and to the urban worlds. Use them as you want, turn on the imagination ...
Attention! 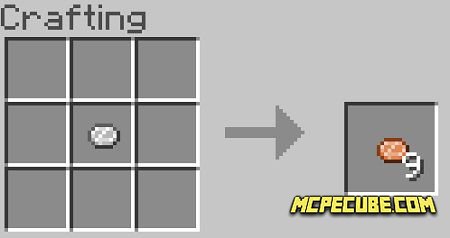