Have you died in the game and lost all your items? This is not a problem now. With the new add-on, players can save their lost items thanks to the tombstone that will appear at the place of their death! It is very convenient and of course, from the name of the add-on, it was so clear what it was about.

In simple words, the essence of the add-on is that when a player dies at the place where he died, a tombstone appears. After death, the player receives a key that teleports you back to your tombstone and allows you to collect all your items. This key also allows players to see certain information, such as the coordinates of the tombstone (where you died) and the player's nickname.

Use the key to open the tombstone and pick up your lost items for a while. Now after death you do not have to start over, wasting a lot of time on this.

Let's take a look at all the most interesting facts about the new add-on.

Features of the tombstone add-on

As mentioned earlier, the new add-on allows players to collect all their items that have been temporarily lost. The essence of the add-on is that when a player dies at the place where he died, a tombstone appears. After death, the player receives a key that teleports you back to your tombstone and allows you to collect all your items.

This key also allows players to see certain information, such as the coordinates of the tombstone (where you died) and the player's nickname. Use the key to open the tombstone and pick up your items.

Before you start using the add-on, make sure that you have configured the required settings correctly.

IMPORTANT: Attention, players must also adjust the experimental settings in the game in order for the add-on to work correctly, you should pay special attention to the Gametest Framework field! 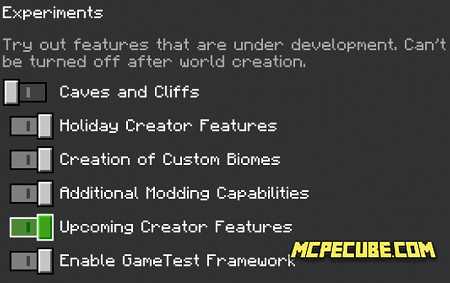 It is also worth noting that this add-on has two available configurations which you can find out about below. 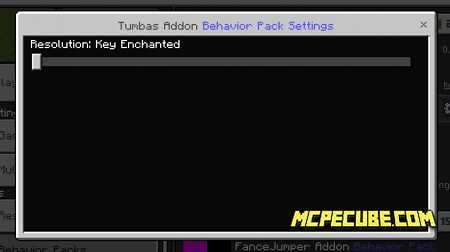 The second configuration, in turn, gives more challenges to the player. The difficulty lies in the fact that players have a small probability of getting an enchanted key, namely only 10%. 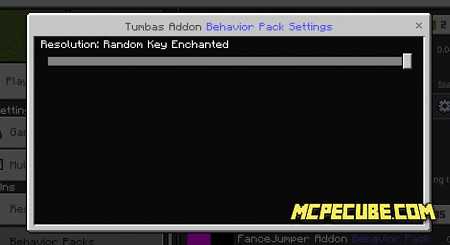 In the remaining 90%, players will receive a simple key that will show you the coordinates and simply allow you to open the tombstone.

For those who do not like the shadow of the tombstone, players can remove it, for this, go to the game settings, select the video button and deactivate the function called Fancy Graphics.

You can see screenshots below:

Another important fact is the name tag of the player. The fact is that after death, the tombstone will appear at the place of death of the player with the player's nickname. 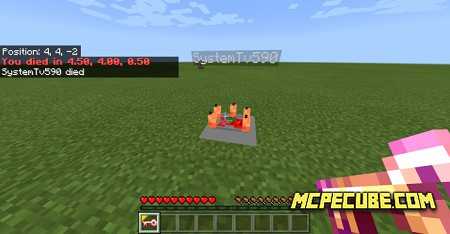 Depending on the configuration that the player has chosen, he will have the appropriate opportunities, namely, to receive an enchanted key or an unenchanted key.

The enchanted key teleports and the second one simply opens your tombstone, everyone chooses what is more convenient or more interesting to use. It is important to know that the player's nickname must be without spaces in the middle, for example, the Name Name nickname is not supported by the add-on and in order for everything to work correctly, you need to remove the space in the middle by making the nickname like this: NameName.

Nickname without spaces is supported by the add-on and will work correctly. You can use absolutely any nickname as long as it is without any spaces.

Also, some of you may have a very good question, namely: What if you died in lava? How then to get to your items and pick them up? This is a very good question as even then there is an easy solution! With this add-on, this is not a problem at all, since your tombstone will be generated at the place of your character's death with cobblestones under it. 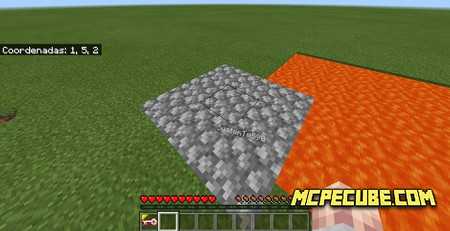 Such boulders under and around your gravestone will keep your items from burning, and will also allow you to easily take them back thereby saving your life.

In order for the player to use the enchanted key that can teleport you to your tombstone, you need to hold the key in your hand, as well as hold the screen (if you are using a mobile device), if you are using the PC version of the game, you just need to right-click button.

Also, if you died far enough from the place of the spawn, and do not remember in which direction you were moving, the key will tell you the exact location of your tombstone thanks to the coordinates.

This feature will allow the player to never lose their tombstone and always have the opportunity to return and pick up their items. In the case of the enchanted key, everything is much simpler, as it was already mentioned above, it simply teleports you to your tombstone.

But what about the multiplayer mode?

Don't worry, this addon also supports multiplayer mode! It is important to know that after death each player will have personal coordinates and a key that can be used only by one player, in other words, each player after death will have his own individual key that only he can use and know the exact location of his tombstone, and only the one who died.

Also, players can use a special sub pack with both a simple and an enchanted key for teleportation for Realms!