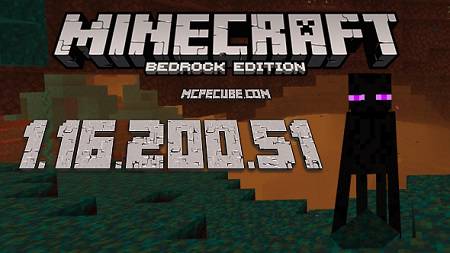 For those who do not know yet and missed the last Minecraft PE 1.16.200.51 update, last Thursday the developers of Mojang presented a new beta version of Minecraft PE (Bedrock) Beta 1.16.200.51, in which the developers have fixed various bugs related to gameplay, mobs, and special features. In the new version of Minecraft PE 1.16.200.51 for users of Android devices, with a working Xbox Live, new items, locations, mobs, and materials are available, such as Lodestone, Warped Forest, Ruined Portal, and much more!

The developers from Mojang Studios have released another Nether Update. In Minecraft 1.16.200.51, they fixed a number of bugs. First of all, this affected the screen reader.

Before getting acquainted with all the new fixes, let's take a look at the content available to every player in the Nether world in a nutshell.

The first thing to draw your attention to is the biome. A unique and mystical biome called Warped Forest.

A new biome in Minecraft PE 1.16.200.51, this is a place where only creatures like Striders and Enderman live. Therefore, Warped Forest can be called the safest area in the Nether world. After all, if you do not look Enderman in the eye, then he will not attack the player.

Therefore, it is at this location that you should start your survival. Warped fungi also grow here. With their help, you can tame Striders and scare away creatures like the Hoglins.

While wandering around the Overworld or Nether world, the player may notice a structure like the Ruined Portal. This structure in Minecraft PE 1.16.200.51 is a small structure. There is always a chest with valuable items near the Ruined Portal, rarely a gold block. 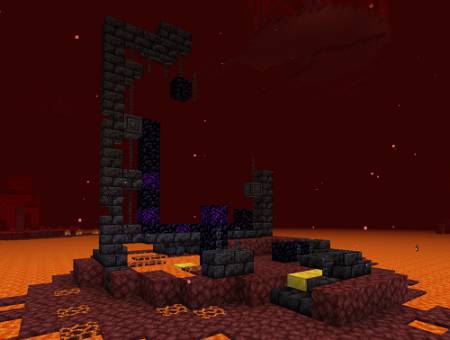 The Ruined Portal is sometimes surrounded by nether stones, magma blocks, lava, and even stone bricks. This is also where the Crying Obsidian is generated, which is needed to craft the Respawn Anchor.

With the help of Lodestone in Minecraft PE 1.16.200.51, you can change the purpose of the compass. Thus, this device will begin to point not to the player's spawn point, but to the Lodestone block. This means that now there is no need to remember the coordinates of various places. You just need to use Lodestone. 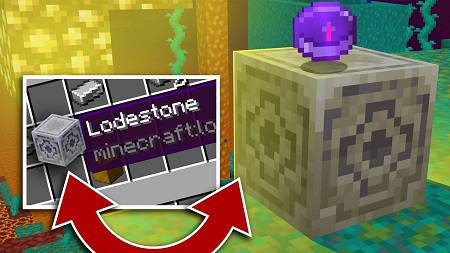 This block can be crafted from eight carved stone bricks and an ingot of netherite. You can get a netherite ingot by combining netherite scrap with gold ingots. If you break the Lodestone block, then the compass connected to it will start to rotate chaotically.

As you know, in Minecraft PE 1.16.200.51 there is such a new mob as Hoglin. This is the only creature in the entire Nether world, from which meat drops out at death. 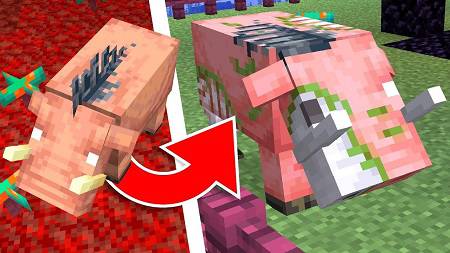 However, when Hoglin enters the Overworld, he changes his appearance. To be more precise, the hoglin turns into Zoglin. This is an extremely aggressive mob that attacks all mobs, including the player. When dealing with damage, he also throws up the victim.

-Fixed errors in messages related to the death of players from various mobs;
-Nezersky bricks can be crafted again;
-Fixed the number of nonzero bricks in the Crafting Table.

-Increased the allowed distance for the appearance of raid mobs, and also improved the ability to find suitable positions for the raid.

-Fixed a bug due to which an item locked in the inventory could not be moved to the armor slot.

-Fixed a bug that caused anyone who used query.get_equipped_item_name with an item that had been renamed not getting the correct result.
Minecraft PE 1.16.200.51 for Android
minecraft-1-16-200-51.apk
Download free[123.25 Mb]