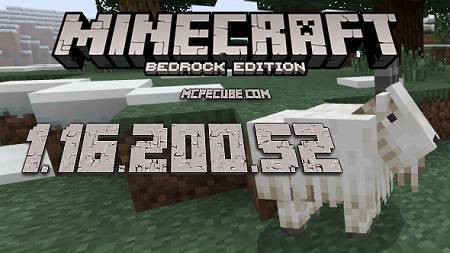 We are already used to it, and we know that the developers of the Mojang studio release another update every week with bug fixes and small changes. Yesterday was no exception, and yesterday we were presented with a new beta update, which is already available to all owners of Android devices. This is not just an update with certain bug fixes, which we want to note not a small number, but also unexpectedly for all players, a new mob, and a new block from the upcoming Cave/Mountain update have been added to the Minecraft world!

The new update is called Minecraft PE 1.16.200.52 (with a working Xbox Live!). The main feature of this update is not only a large number of fixes, and there are about 50 of them, but also a new mob, namely the Mountain Goat and a new type of block called Powder Snow.

About a year after the first news from Mojang about the Mountain Update, the developers released the first part of the new content, as a new mob and block. Minecraft PE 1.16.200.52 has one new mob and block. Also, the game now has four new settings, which you will read about later.

The first thing we would like to draw your attention to in this update is, of course, Gameplay, since this is the most important aspect of the Minecraft world, in our opinion.

Already at the moment of the creation of the world in Minecraft PE 1.16.200.52, the player may see some changes. Most of the upcoming updates related to these changes. For example, there is a setting for creating custom biomes. There are also additional modding options, which are very important for the creators of various additions to the game. 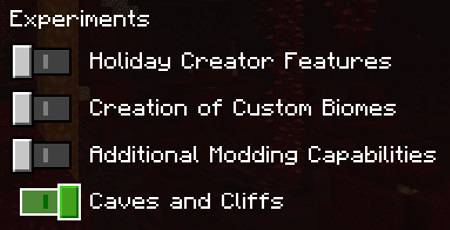 This means that the developers of Mojang are planning to further expand the capabilities of the creators of various modifications in the future. The last function in the settings, such as Caves and Cliffs, is responsible for the Mountain update. After enabling it, the player will be able to look at the new additions on their own. Including a new mob that you will learn about below.

In Minecraft PE 1.16.200.52, in addition to new features in the game settings, Mojang also added a new mob, namely a Mountain goat. Unfortunately, to date, this mob does not have one and constant spawn point, that is, in other words, home and can be found in different parts of the mountains.

Mountain Goats are literally the kings of the mountains because they can climb to any height, both with fast speed and slowly, because they are not afraid to fall and even if this happens they will not die. But we draw your attention to the fact that these creatures do not like guests and will happily throw an uninvited guest from their territory. 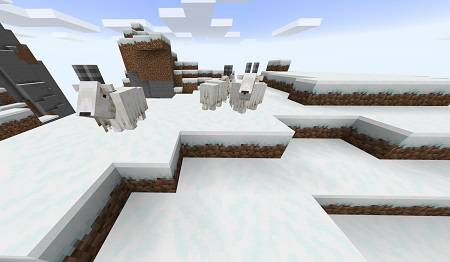 Therefore, from now on, you should be careful when exploring the mountains, as you can meet mountain goats. Also, this mob has horns that can be dropped when hitting a tree.

As mentioned earlier, in addition to the mob, a new block was also added to the Minecraft world, namely Powder Snow. 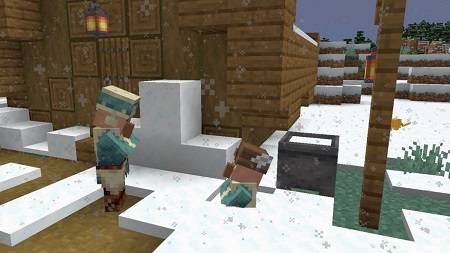 Among the new blocks, first of all, you should pay attention to the addition of powder snow to the game in Minecraft PE 1.16.200.52. Unlike normal snow, the player should be careful with powder snow. After all, he can simply fall into this block at any moment. This block does not look scary at all, but if you just stand on it, you can fall into a trap. In general, this block does not differ much from normal snow, but if you see it, you will understand what the difference is. The only thing that can protect you is leather boots.

As you already understood, the mountains will not be as boring and safe as before, now two dangers will await you, these are mountain goats and a new type of snow block. Be careful and enjoy the new changes.

And of course bug fixes! As mentioned earlier, in total, Mojang found and fixed 53 bugs. We will consider only some of them, in our opinion the most significant.

1.The well-known object that is used for orientation on the terrain, namely the compass, will not disappear from the hands when used with Lodestone (Creative mode);
2. The texture of Netherite leggings has been fixed;
3. The texture of the Zombified Piglin has been fixed;
4. Improved the function of reading text from the device screen;
5.Two creatures such as Piglins will no longer be able to pick up one item that drops next to them;
6. The bug that occurred during the flight was fixed;
7. From now on, the maximum duration of the command: /effect will now be active for 1000000 seconds;
8.Cute bee mobs will only leave their hives from the front;
9.The disappearance of some items from the double chest has been fixed;
10. The command has been fixed: /playsound;
11.The generation of cocoa beans has been fixed;
12.The Profile screen has been fixed;
13.Fixed a bug with the theft of jobs among villagers.
Minecraft PE 1.16.200.52 for Android
minecraft-1-16-200-52.apk
Download free[123.41 Mb]