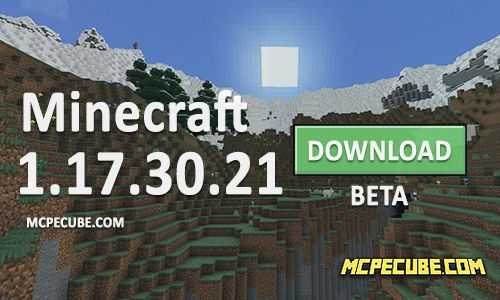 We also added some new changes that relate to the technical part of the Minecraft game. In general, this is a fairly small update, but with new important changes. Let's take a look at the features of the new update below.

In terms of parity, Mojang only changed three aspects of the game:

1. After the player sleeps, he will no longer stand on blocks that can harm him;
2. The player, after waking up, will appear on the side of the bed on which he went to sleep;
3. Mob spawners will no longer glow.

As mentioned earlier, in the new test update, the developers have fixed only seven new bugs, and which ones you can see in the list below:

1. The loading of large worlds from the Marketplace to Minecraft has been fixed;
2. Crashes of worlds on some devices using Android11 have been fixed;
3. Such mobs as zombies, skeletons and other hostile creatures of the sub-type will burn under the sun's rays even if there is Powder Snow nearby;
4. A bug was fixed that concerned a very long loading of the game world. This bug occurred if the player clicked to view the skin sets;
5. Colors of certain categories and item names have been corrected. They will now match each other;
6. The loom will correctly display the patterns with the texture pack;
7. Fixed numerous other minor crashes.

Technical aspects of the game

Mojang developers have added nine new game aspects for in-game content developers. Now it's even more convenient to create mods. You can read more about this on the official source.
Minecraft PE 1.17.30.21 for Android
minecraft-1-17-30-21-xbox-servers.apk
Download free[131.94 Mb]