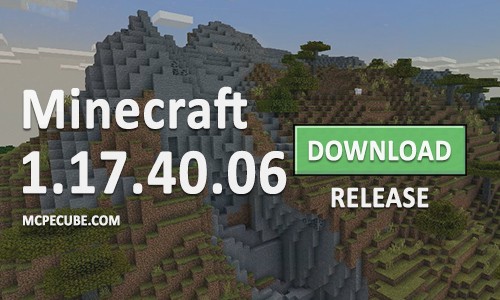 Have you been waiting for the new release of this week's update? If yes, then we present to you a new release of the full update of the Minecraft PE version 1.17.40.06, which is already available to all players who use Android devices to play Minecraft. In the new update, you will find changes such as new Stone Peaks, fixing more than forty different bugs, and adding more than twenty different changes. Most of the fixes and changes were carried over from previous test versions to optimize the game.

Below you can see all the main features of this update and learn more about the most important changes in this update!

The first feature we need to consider is the new Stone Peaks. Please note that these peaks are generated at the tops of the mountains, as well as generated at the junction of warm and cold biomes.

The next thing we should draw your attention to is, of course, the new changes in the Experimental features of the game. In total, twenty-three improvements have been added for Experimental Mode. You can see the list of the most significant changes below:

1. The update of the world below the Y = 0 level, as well as when activating the Caves and Cliffs mode in the game settings, has been improved. Please note that previously changed parts will not be updated;
2. Now the clouds are generated at the height of the level: Y = 192;
3. New flat worlds are generated starting from level Y = -64;
4. Now the old flat worlds will generate a little higher than it was before;
5. Now the style of the village will depend on the biome and its environment;
6. Copper ore will now generate up to level: Y = 96.

The most important thing of this update is perhaps the bug fixes of various bugs, which, in turn, very often do not allow players to enjoy a good game and have fun.

In total, forty-seven different bugs have been fixed. You can see the list of the most significant fixes below:

1. Crashes in the Worlds Menu when Internet access is lost have been fixed;
2. Now your well-fed character will not eat;
3. Now world settings are transferred to Realms when replacing worlds;
4. The display of the leash when attaching to mobs out of sight has been fixed;
5. Mobs will avoid fire;
6. Improved the spawn of bees;
7. The spawning of the Experience Orb when entering the / summon command has been fixed;
8. Now more mobs will spawn underground;
9. Also now, when teleporting to another dimension, players will no longer burn.

The latest changes only concern the technical aspects of the game. In total, thirty different technical changes were added for Minecraft. All changes will be mostly of interest only to add-on developers. You can find more details on the official source.

Attention: In this version of the update, the generation of the world has been improved. Remember to back up your worlds, otherwise, you will lose them!
Minecraft PE 1.17.40.06 for Android
minecraft-1-17-40-06-xbox-servers.apk
Download free[133.52 Mb]