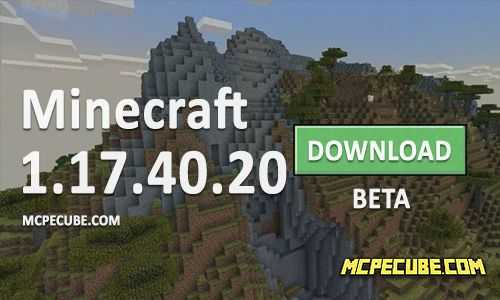 Everyone wondered why Mojang released such a small update last week as Minecraft PE 1.17.30.25, which had only two fixes, while many players were expecting something new. Now the players' dissatisfaction has come to an end, as a small update was aimed at fixing and improving the stability of the game and preceded the release of a new update, namely the test version of the game Minecraft PE 1.17.40.20. This update is already available to all users of Android devices and devices that work using Android operating systems.

The new update added a new biome, made more than ten different changes, fixed more than twenty different bugs, and about thirty technical changes. Let's rather consider with you all the changes we have been waiting for.

Some generation from experimental snapshots was added, including stone peaks, the height of the clouds was changed, RenderDragon appeared (so far only shaders), as well as a textureless particle from the Dark Depths was added, as well as in the files players found a file that was created for the future development of the biome itself. A kind of 1.17.40.20 can be called the first beta version of Minecraft 1.18, or, as most often players say, this is a real pre-beta 1.18!

The first thing that we should rather consider is a new biome called Stone Peaks!

Now let's take a look at some of the experimental features in the game.

In total, 15 different changes were made to the game. You can see the most significant in the list below:

1. Plants in mountain meadows have been fixed;
2. Dripstone cluster is generated only in Dripstone cave;
3. Pointed Dripstone block traits are generated only in the Dripstone cave;
4. The infected block is generated under new mountains;
5. The clouds are now at y = 192;
6. Changed the location of biomes, the size of the rivers, and the shape of the landscape;
7. Trees in swamps grow deeper in the water;
8. Deepslate is generated at lower levels;
9. Wrong color of blocks on maps below zero level has been fixed;
10. Cave vine is not generated on the surface;
11. The cave vine can grow down below zero;
12. The inconsistency of villages with the biome has been fixed;
13. There were changes as in the Java snapshot:

- Elements of the Mountain biome;
- Distribution of ore;
- Frequency of spawning of mobs in mountains and caves.

Also, four other changes have been added to the game. You can read more about these changes in the list below:

1. Hives are generated when entering Minecraft;
2. Improved the creation of maps by cartographers;
3. Armor is no longer displayed on Pillagers and Vindicators, but the effects remain;
4. More mobs will now spawn in Overworld caves.

Attention: There is one problem with this version of the update, namely that bee nests are generated too often. This problem is already known by the developers of Mojang and is doing everything to solve it.

In total, the developers have fixed 28 different bugs. You can see the most interesting in the list below:

1. The function of falling Stalactites has been fixed;
2. A bug related to eating a Cake with a candle has been fixed;
3. Fixed crashes in the character editor;
4. Fixed Steve's skin color in the Character Editor;
5. Fixed the message about changing the skins of the players;
6. Entering the command: @e [type =], does not display items from the Educational Edition;
7. Fixed a bug with burning the player when teleporting to another dimension;
8. Now players cannot eat when the Hunger Indicator is full;
9. Seaweed is no longer generated under Water Lilies;
10. Fixed a bug with constant opening and closing of Doors by Villagers;
11. Geodes of amethyst are less often generated in Fortresses, so as not to break the portals of the End;
12. Improved the movement of mobs around incomplete blocks;
13. Powdered snow no longer shines through at a distance;
14. Fixed the direction of the hatch when installing the Structural block;
15. Fixed bugs in the user interface.

And the last aspect of the update is, as always, technical changes!