If you were missing a doctor who will heal you after a zombie attack, then rather install this new Doctor Husk addon. This mob, which can be placed at its base, and he will do his job. The main thing is not to forget to visit him, because although he is resistant to fire, but water and rain have a lethal effect on him.

The addon has new functions for the doctor, as well as the ability to heal.

If you received any damage during the battles with enemies, it does not matter, the new mob Doctor Husk will be able to heal you. It takes a small amount of time, depending on the damage.

In order for it to appear, you need to take an egg to summon a husk. There is, of course, one more difficult way. You can try to find it in desert biomes. There is one caveat, the doctor cannot move, so you will have to find a way to get him to your home.

In order for Dr. Husk to begin to heal, your character needs to stand next to him. There are also some additional features in this addon:

To remove the effect of a potion that lowers health, you need to drink a glass of milk. 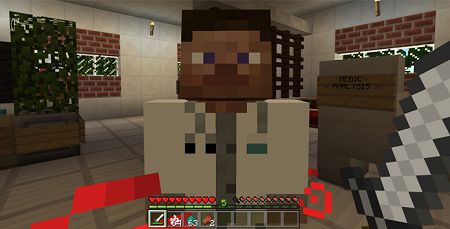 Protect your doctor as he can die in the water and rain.

Also, the doctor has the ability to be immune to fire.

Changes in the new update

Related News:
StoneTombs Addon V3 Add-on 1.17+
Have you died in the game and lost all your items? This is not a
Teleporting rings - Teleport home Add-on 1.17+
Would you like to travel the world of Minecraft and visit as many
Infinite Desert Add-on 1.17+
We present you with a new version of the Infinite Desert addon that
Dragon Add-on 1.16/1.15+
Do you like big and powerful creatures like dragons? They are large
Comments (0)
Commenting